IGUANA BOY VS. THE 30 SECOND THIEF 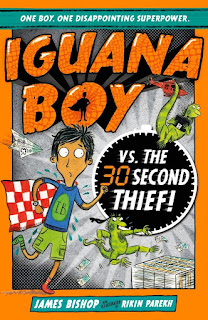 SYNOPSIS-
It is Iguana Boy's first day at  Superhero Headquarters and he wants to put on a good impression of himself and his pet iguanas- Paul, Smelly Paul, Red Eye Paul and Pauline. However, he ends up wearing pizza covered shorts, and not taking a bath, because one of the iguanas accidentally switched the alarm off in their sleep.

Dylan, whose nickname is Iguana Boy, can speak to iguanas. His sister, Millie Monday (who can only use her powers on Monday, which are shooting laser beams from her eyes and flying) and his brother, Arctic Thunder (who can control the weather and fly) both work at the Superhero Headquarters and they are Ron Strongman's favourites.

Ron Strongman is the head of the Superhero Collective and he wants Dylan's brother to have his office expanded because he finds out that Arctic Thunder has 'only one water dispenser and no private bathroom'. Therefore, Terrifying Suzanne, whose power is to be terrifying, has to move into their tiny room, which some superheroes think is a cloakroom because it has pegs at the back, but Dylan already has a roommate called VentriloChris.

Then, Iguana Boy gets a call from Ron Strongman that he is in charge of a whole department! However, it turns out that all he and his team (VentriloChris,  who can throw his voice, the telepathy twins, who can only do telepathy between themselves, Terrifying Suzanne and Iguana Boy's team of iguanas) have to do is rescue cats from trees. This is considered to be a waste of time in the superhero world.

So, when Repeat Offender, a supervillain starts robbing banks, Dylan and his team are fed up as they want to help bring Repeat Offender to justice rather than rescuing cats. It's not fair! They're not even allowed to try! But, will their team find an excuse to be at the crime scene? And what about Repeat Offender's superpower? Will they find out what it is and be able to stop him?

I loved reading this book because it is an adventure and extremely interesting. It's the second book of the Iguana Boy series and it's even better than the first one: Iguana Boy Saves The World With A Triple Cheese Pizza. My favourite part was when Iguana Boy kept being late for the assembly and when he opened the door, it creaked loudly. I enjoyed this book because it hooked me in as soon as I started reading it.

I give this book a hundred stars!

This book taught me that if someone else says that you can't do something, they are wrong, because you can do anything if you really want to.

HAVE YOU READ THE OTHER BOOKS IN THIS SERIES?
Iguana Boy Saves The World With A Triple Cheese Pizza
Iguana Boy And The Golden Toothbrush


If you like this book, you will also like:
Harry Potter and the Philosopher's Stone
Bad Dad
Birthday Boy

“So please, oh please, we beg, we pray,
Go throw your TV set away,
And in its place you can install
A lovely bookshelf on the wall.
Then fill the shelves with lots of books.”
― Roald Dahl

JANYA
I am writing this blog so that children like me can find some interesting books to read and enjoy reading. Reading gives me immense pleasure and I want to spread the joy of reading. My blog is one of the top 25 blogs for Children's books in the UK https://blog.feedspot.com/uk_children_book_blogs/

Book of the Week

THE WIZARD OF OZ SERIES 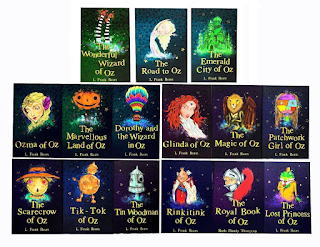